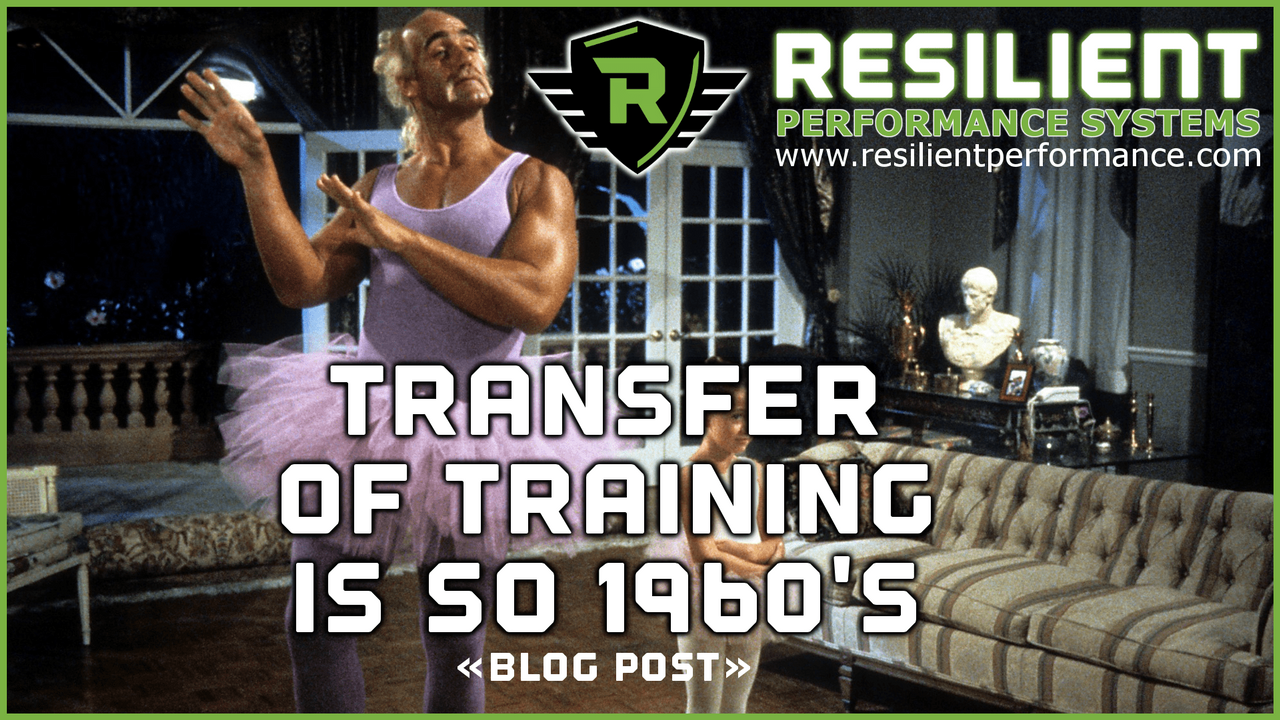 The relative proportion of general aptitude and specialization required for high-level performance is a timeless question in virtually every discipline.  In the physical preparation field, most coaches believe that their training methodology “transfers” to the game or somehow influences winning on the field.  So many factors influence the outcome of the game, however, that it is difficult to determine if what one does in a weight room or on a running surface does indeed directly “transfer” to a court or field independent of other variables, mathematics and statistics notwithstanding.  To be clear, the challenge of quantifying transfer does not justify, as an example, running repeated three hundred yard shuttles to prepare for American football. Embracing uncertainty should not preclude one from applying that which is already generally understood.

The definition of transfer is not universally accepted.  Some coaches suggest that high transfer exercises must closely mimic the sporting action while others argue that anything that could potentially improve skill acquisition for the better suffices.  I tend to see training as a continuum where no clear boundary exists between general and specific training and therefore gravitate more toward the latter definition, which is admittedly broader and perhaps less satisfying.  “Transfer” is a lot like the word “functional”.  Every component of a program should serve some kind of a purpose and at least peripherally enhance competitive outcomes hence why terms like “transfer” and “functional” are effectively rhetorical.  Furthermore, an exercise that seemingly “transfers” for one athlete might not do so for another.  In practice, the distinction between general and specific training is academic because training is a complex process, not the summation of individual exercises.  That which we can’t quantify, the interactions between the parts, is what differentiates training a human being from programming a machine.  Additionally, exercises are often presented as binary choices (e.g. are barbell hip thrusts or squats “better” for improving acceleration).  As suggested here, perhaps our assumptions about how exercises should be quantitatively differentiated warrant further consideration.

Moreover, fixating on transfer disproportionately prioritizes the sport itself, which could actually be problematic in certain contexts.  The concept of transfer in physical preparation was first formally emphasized in former Eastern Bloc training manuals.  “Special” exercises were those that supposedly had the greatest carryover to competitive performance.  In the former Soviet Union, athletes were identified at a young age to participate in various sports based on innate predispositions.  These athletes often trained in sporting academies where a significant period of their youth was devoted to general athletic development.  Young weightlifters, for example, participated in track and field and gymnastics, played pickup basketball, swam, and cross-country skied before they formally competed in weightlifting.  In 2018, American pitchers compete on multiple baseball teams throughout the year and sometimes require Tommy John surgery around the time they first qualify for admission to a PG-13 movie.  Pitchers that survive hellacious little league and club competition schedules typically don’t need to worry about “special” exercises when they reach the collegiate and professional levels.  They’re already really good at pitching and things that resemble pitching.  They need what they should have received in gym class or on a playground free from hovering adults (or in a state run sporting academy if that’s your thing) but likely never did- how to do a proper push-up or pull-up, how to skip/run/jump/climb, how to roll/fall/wrestle, how to attain and control fundamental human positions so they aren’t dependent on soft tissue work/cupping/dry needling/foam rolling everyday.

Taken out of context, the translated Soviet training manuals would have us believe that “special” exercises distinguish champions from everyone else.  That may have been true in a communist system that valued athletic development at the expense of other, arguably more important things.  In the United States in 2018, there is much lower hanging athletic fruit.  Here, more competent coaches are needed at the youth and developmental levels than anywhere else.  The incentives at the professional and sometimes even the collegiate level preclude many performance teams from applying a great portion of their expertise. It is nearly impossible to train and develop athletes whose schedules are dictated by ticket sales and television revenue, especially in season.  Natural selection and an extensive gene pool help to overcome an otherwise highly flawed developmental system.  The Soviet system of athletic development was about way more than special exercises hence the danger of cherry picking things in isolation and assuming they’ll work in a completely different setting.  Besides, I never understood the infatuation among human performance professionals with Soviet training.  Coaches argue over everything these days, even that which likely doesn’t matter very much yet rarely is anything that appears in translated Eastern Bloc texts ever really scrutinized.  Lest we forget, Rocky beat Drago.  In conclusion, just listen to Jeremy Frisch. Just because...