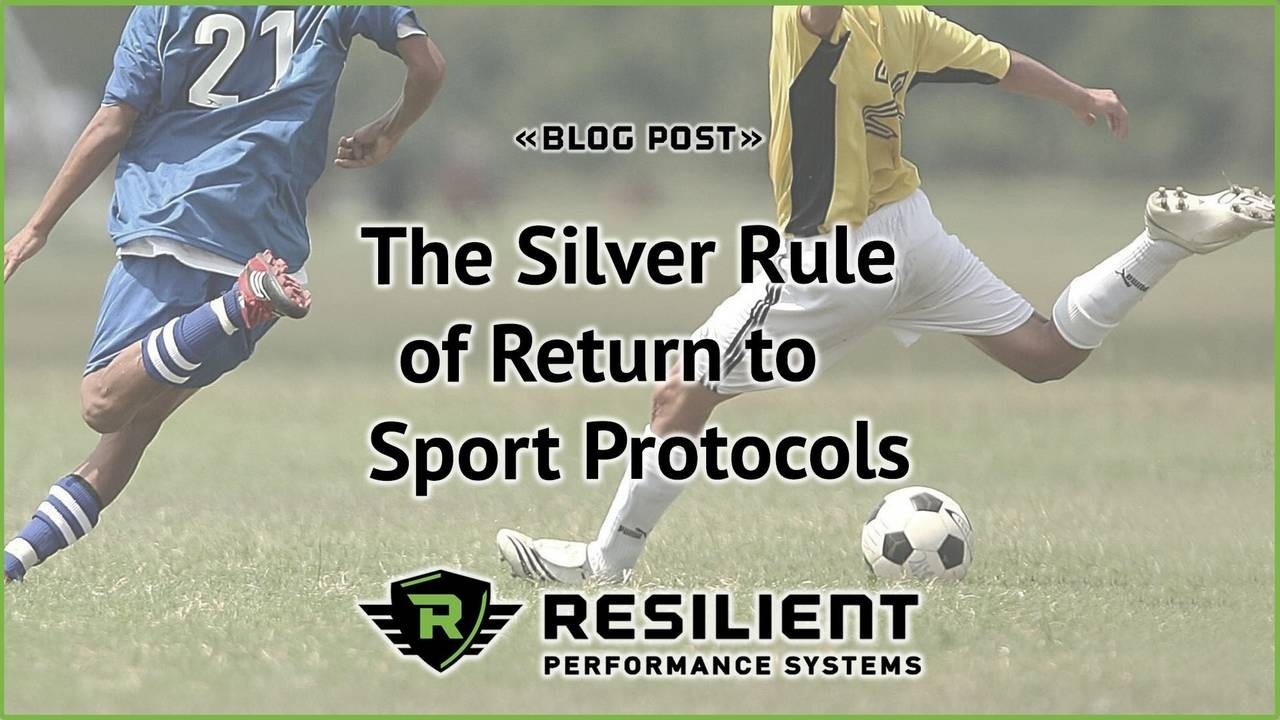 The Silver Rule of Return To Sport Protocols

Clarity of expectations among surgical and rehabilitation providers is paramount following an extensive surgery like an ACL reconstruction. Post surgical protocols are one way to control or manage expectations. Generally, the point of contention between surgeons and physical therapists/athletic trainers is who decides what the protocol should look like. Physical therapists tend to reason that surgeons don’t have enough direct experience working with athletes outside the operating or examination room to dictate the patient’s progression. Conversely, the sentiment among many surgeons is that they effectively “own” the patient even after the surgery because they assumed the greatest risk and exercised the care that requires the most training and skill. An orthopedic surgery gone awry can result in permanent disability and even death. The worst case scenario rehab wise is a recurrence of the original injury (e.g. retearing the ACL during a change of direction scenario or disrupting a repair site via overly aggressive mobilization early on) in which case the surgeon would have to clean up the mess- again. Both parties’ concerns seem legitimate on the surface so what’s a reasonable compromise?

To start, physical therapists might acknowledge that surgeons perform the most risky and technically demanding component of the patient’s care. There’s much more at stake during a surgery than even the most complex rehab case hence why surgical training is substantially longer and has a higher barrier to entry than physical therapy. The tremendously demanding nature of surgical training is exactly why, however, most surgeons possess only a superficial understanding of rehab components like strength development, running technique and linear speed, change of direction progressions and game speed, integration of physical qualities with technical and tactical preparation, and programming. There’s just too much to know for any single provider or profession to unilaterally decide how to most effectively manage a post-operative return to sport scenario.

Post-operative protocols, therefore, should minimize the potential for catastrophic harm while allowing all participating providers to contribute their expertise. Decentralized, less micromanaged and scripted protocols is a means to this end provided certain safeguards are in place.

Via Negativa: in theology and philosophy, the focus on what something is not, an indirect definition, deemed less prone to fallacies than via positiva.  In action, it is a recipe for what to avoid, what not to do- subtraction, not addition, works better in domains with multiplicative and unpredictable side effects.  In medicine, stopping someone from smoking has fewer adverse effects than giving pills and treatments.

Silver Rule (negative golden rule): Do not do to others what you would not like them to do to you.   -Skin In The Game, Nassim Taleb

Decentralized solutions are typically criticized for promoting disorder and lacking structure. There are unintended consequences to top down guidance, however; sometimes even more chaotic outcomes. Via negativa and the silver rule provide boundaries and constraints to a decentralized system to maximize the aptitude of the entire medical team while minimizing the tail risk or potential for low probability but ruinous events. In the abstract, return to sport is no different than normal sport preparation but for the post surgical constraints that account for tissue healing and reduced joint function acutely. The “protocol” should be dictated by the demands of the sport while respecting the additional potential for harm imposed by the pathology.  In other words, return to sport is not a novel question but for the silver rule/via negativa parameters imposed by the surgeon.

In rehabilitation, well-intentioned, highly skilled surgeons often dictate the patient or athlete’s progression. Since surgeons assume the most risk in the return to sport process, it seems fair that they get to dictate what is off limits (not what to do) to the rehab providers. Physical therapists should grant surgeons this level of deference even if they don’t agree with the surgeon’s silver rule (what not to do) parameters. Surgeons are justifiably concerned about their good work going to waste if the rehabilitation isn’t sufficiently careful. Protocol-wise, therefore, they should be permitted to establish what is totally off limits at various times during the patient’s plan of care. Surgeons risk poorly preparing the athlete for return to sport if, however, they try to dictate to the rehab providers how the athlete should reintroduce running, as an example. As a physical therapist, I want to know what I am not permitted to do so as not to compromise a surgeon’s skillful efforts. Beyond that, my clinical decision making process remains unchanged; ensure the athlete is physically prepared, with no false confidence, for the sport by working backwards from the demands of the game.

Via negativa-based protocols respect the surgeons who assume the risk while exploiting the expertise of the rehabilitation providers. Besides, how much can a physical therapist really be trusted if he/she requires a detailed, scripted protocol from a surgeon to progress a post-operative patient? Rehabilitation is too dynamic to continually separate the clinical decision making from the mere execution of a canned plan. Post-operative rehab protocols, therefore, should emphasize what not to do, not what to do.