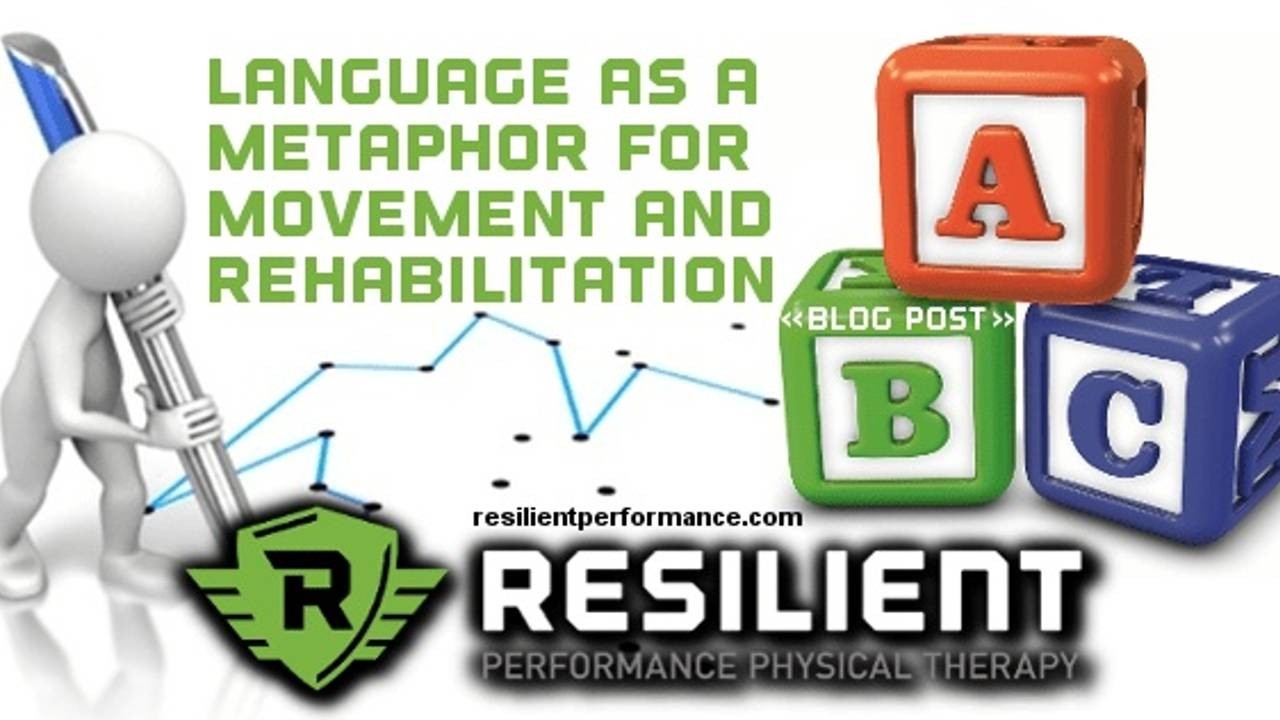 Language As A Metaphor For Movement And Rehabilitation

The importance of language continually arises in rehabilitation circles.  Various paradigms exist that attempt to explain why people hurt and how said people can improve their function.  In rehabilitation, there is often a false dichotomy between biomechanical and psychosocial models.  These constructs are distinguished to make information more digestible and facilitate learning in the abstract but cannot be differentiated in practice.  The bio is the psychosocial and vice versa.  Perhaps the term “biopsychosocial” is just a rhetorical response to reductionist, incomplete, and erroneous preexisting models. In rehabilitation, the pendulum seems to be shifting more towards the psychosocial end as research continues to elucidate the unsatisfying relationship between structure, mechanics, and pain, for example.  Non-mechanical explanations about pain and physical output, however, aren’t necessarily better understood than mechanical ones.  We just do happen to know now that mechanical explanations aren’t the whole story or often even the lead actor.

We’ve yet to identify all the characters in the movie, which is why replacing flawed mechanical explanations with incomplete neurophysiological ones doesn’t necessarily enhance the integrity of the messages rehabilitation providers convey.  Sometimes less, in this case words, is more.  Patients want answers and it can be difficult to resist the urge to explain the “why” to them.  We still know very little about the why when it comes to pain and disability though.  Medical providers intellectually incriminate themselves when they speculate about things they can’t definitively prove.  Outside of concrete and decisive mechanisms of injury, like a broken bone or a stroke, nobody really knows why anybody hurts or exhibits incomplete physiological output.

By focusing on the things that influence actual interventions, rehabilitation professionals might better satisfy patients’ expectations without compromising themselves with the ambiguity of the why.  While pain mechanisms can be interesting to discuss conceptually, pragmatically pain education from rehabilitation providers ultimately comes down to two things: interpersonal skills and not saying stuff that isn’t true.  Interpersonal skills allow the message to be delivered in a less threatening way regardless of the pain’s “source”, if such a thing even exits.  That many explanations about pain are grossly inaccurate and overly anatomical need not generate the compulsion to fixate on other pain mechanisms to patients.  When warranted, providers can convey a sense of urgency without inducing unnecessary anxiety or inciting catastrophe.  Regardless of the situation, emphasizing the process or the “what” reduces the compulsion to fixate on the more dubious why.  Language itself is a great metaphor for the rehabilitation process.

When people are in pain their movement alphabet usually changes.  They have access to more or less letters from which to craft sentences (simple movements with more constraints) or stories (complex movements that incorporate greater load, speed of movement, fatigue, and unpredictability).  In any complex biological system, there is an optimal range of variability that is necessary to maximize performance and sustain life.  Too much variability is chaos and too little is rigidity.  The distant ends of the continuum in either direction are deadly.  In the cardiac system, for example, asystole (no electrical activity, rigidity) and ventricular fibrillation (completely chaotic electrical activity) are both lethal rhythms.  Similarly, an alphabet containing no letters/symbols or an infinite amount of them renders written communication impossible.  From a movement perspective, the appropriate depth of the alphabet depends on the task.  Pain generally alters one’s baseline alphabet.  Pain shouldn’t be the only reason to examine or reexamine the depth of the alphabet, however.

The number of letters simply reflects the options that will be available when the letters are combined and synthesized into writing.  Provided one is not overwhelmed by more options, a larger alphabet can be more desirable.  Under real or imagined stress (running from a predator) and in increasingly constrained environments (working on an assembly line), decreasing the number of available options can be protective and adaptive.  It’s the same reason that pilots refer to checklists and streamline their procedures during emergencies.  Increasing the degrees of freedom or number of options in the face of threat makes an already stressful situation even more overwhelming. People can still speak in sentences if we remove a few established letters or add some unfamiliar ones.  These sentences still might communicate the idea adequately (or not) but the more the size of the alphabet gravitates towards either extreme, the greater the threat to health and performance.  Regardless, it’s never a bad idea to review and reinforce the alphabet even in high-level performers. As Sidney Dekker discusses in Drift Into Failure, successful outcomes are not always indicative of safe practices in complex systems like aviation or medicine.  Everything matters, even the seemingly trivial stuff like the alphabet.

In cases of serious trauma (ligament tear, broken bone), a pathological degree of variability accrues as tissues are damaged beyond the point of repair and passive stability is lost once the initial guarding response subsides.  There are more letters available than the system can handle or stabilize.  In chronic pain not associated with a previous trauma, people are typically fearful of movement and of accessing the entirety of the alphabet.  Either way, variability needs to be restored to a more normative range.  Again, this range is contingent upon the individual’s history and goals.  In cases of mild or even moderate joint compromise, rehabilitation can improve motor control and stability, thereby restoring the requisite alphabet.  Joint pathology so serious that it suppresses rehabilitation-induced alterations in alphabet size should be reserved for practitioners whose scope of practice permits them to change anatomy.  This is why the term “orthopedic physical therapy” is a misnomer.  Only surgeons treat true orthopedic problems.

Nevertheless, the most important part of rehabilitation is to identify when legitimate pathology is driving symptom provocation and influencing the size of the alphabet and refer out to a specialist if required.  After pathology is cleared through history taking, objective testing, or diagnostic imaging, the next priority is to restore the size of the alphabet to provide a more suitable breadth of movement options.  Gross movement patterns, basic joint assessments, and even the training process measure the size of the alphabet.  Somebody with shoulder pain might be missing active or passive overhead range of motion relative to what’s normal for him/her or to what’s required to achieve his/her performance goals.  Regarding the latter, it’s a problem when a competitive swimmer, for example, is missing active shoulder flexion bilaterally regardless of pain.  Absence of full flexion means poor streamlining in the water and more drag.  Barring any medical red flags, it doesn’t matter why that person’s shoulder hurts, but that overhead motion needs to be restored.

To be clear, constructs like “shoulder impingement” and “rotator cuff syndrome” aren’t medical red flags or even helpful diagnoses.  Neither are things like “patellofemoral pain syndrome” or “sacroiliac dysfunction”.  These are just unnecessarily long ways of saying that a particular region of the body hurts and lacks full capacity for sentence structure. For some people, simply restoring a basic motion like active shoulder flexion to their baseline may be sufficient.  For others, like a starting baseball pitcher who might have to throw a hundred pitches in a game, modifying the alphabet is not enough since simple sentences will not suffice. A marathon runner might report that he/she only feels knee pain 10 miles into a long run.  A powerlifter might not feel any low back discomfort until squatting or deadlifting over 80% of his/her maximum.  A cancer survivor might be fine climbing 2 flights of stairs with an assistive device but not the 3 flights necessary to enter his/her apartment.

In these instances, the size of the alphabet may be adequate but crafting coherent strings of words is still difficult.  This is why power (think horsepower) and capacity (think fuel economy) matter and why rehabilitation cannot be distinguished from fitness training.  It’s also why pain reduction should not be the only goal of rehabilitation.  Improving function and output is good medicine.  The relative degree of necessary power and capacity is situation dependent.  These qualities need to be considered in every instance, however, because the objective of rehabilitation is to prepare people’s movement systems for whatever they are likely to encounter.  Pain reduction is not always synonymous with preparation.  Legitimate preparation requires an adaptive physiological buffer slightly beyond the minimum level for task completion. Seeking to develop too much of a buffer also constitutes inadequate preparation because adaptive reserves are wasted on physiological excesses.  In any complex system, everything comes at the expense of something else.

Early rehabilitation generally focuses on the alphabet while end stage rehab ought to emphasize sentences and stories.  At any stage of the rehab process, however, all aspects of “language”, movement in this case, should be addressed albeit in different proportions.  The letters that cause or result from knee pain (the distinction doesn’t matter practically) may not influence the development of power or capacity in the upper body or even systemically depending on the task.  Additionally, maintaining or developing capacity, as occurs with regular aerobic exercise, is positively correlated with favorable changes at the alphabet level and helps to maintain chronic loading and systemic fitness.  Sometimes, general exercise is the only way to move without pain since “localized” rehabilitation can overly sensitize painful regions of the body.  Insurance companies often don’t agree with this supposition and might not reimburse for anything that doesn’t explicitly address the painful region.  The dirty secret is that no rehabilitation professional is directly treating something like knee or back pain.  They’re only addressing variability, power, and capacity.  Only surgeons do things to anatomy.  This is why specialty “knee” and “shoulder” rehabilitation courses essentially amount to technical anatomy reviews that tend to lack much clinical application.  Surgery warrants specialization by anatomical region.  Rehabilitation does not.

Scientists and researchers should continue to pursue knowledge and refine current paradigms about the why.  Clinicians should seek to understand the “why” or at a minimum, not perpetuate mistruths.  They need not fixate on the why, however, when it doesn’t influence patient care decisions.  The “what” should matter more to clinicians. The “what” is process-driven and empowers the patient.  Explaining this process to patients using language as a metaphor might not be as satisfying as providing a concrete answer but it’s more honest and emphasizes the things that can actually be controlled during the treatment process.  Pain prevents people from telling their story.  Rehabilitation professionals help patients regain the ability to tell their story.  Rehabilitation providers can marvel at the complexity of the systems they help influence without creating unnecessary obscurity and speculating about mechanisms. Patients sometimes demand a level of certainty from medical providers that can’t actually be delivered.  Perhaps medical people ask for it when they don a white coat and introduce themselves by something other than their first name.  Medicine practiced with humility is superior to false confidence and the delusion of certainty though.  “Why do I hurt” is a dangerous question to attempt to answer.  “I’m not totally sure, but here’s a process we can follow to help you achieve your goals” might be the most honest way to reframe the discussion in a productive manner.  Misaligned spines, rotated pelvises, hijacked amygdalas, and sensitized ion channels need not enter the conversation.  Write a new story instead, just start with the alphabet and finish with the story the patient would like to tell.

Fixating on the "why" instead of the "what" can sound like this...