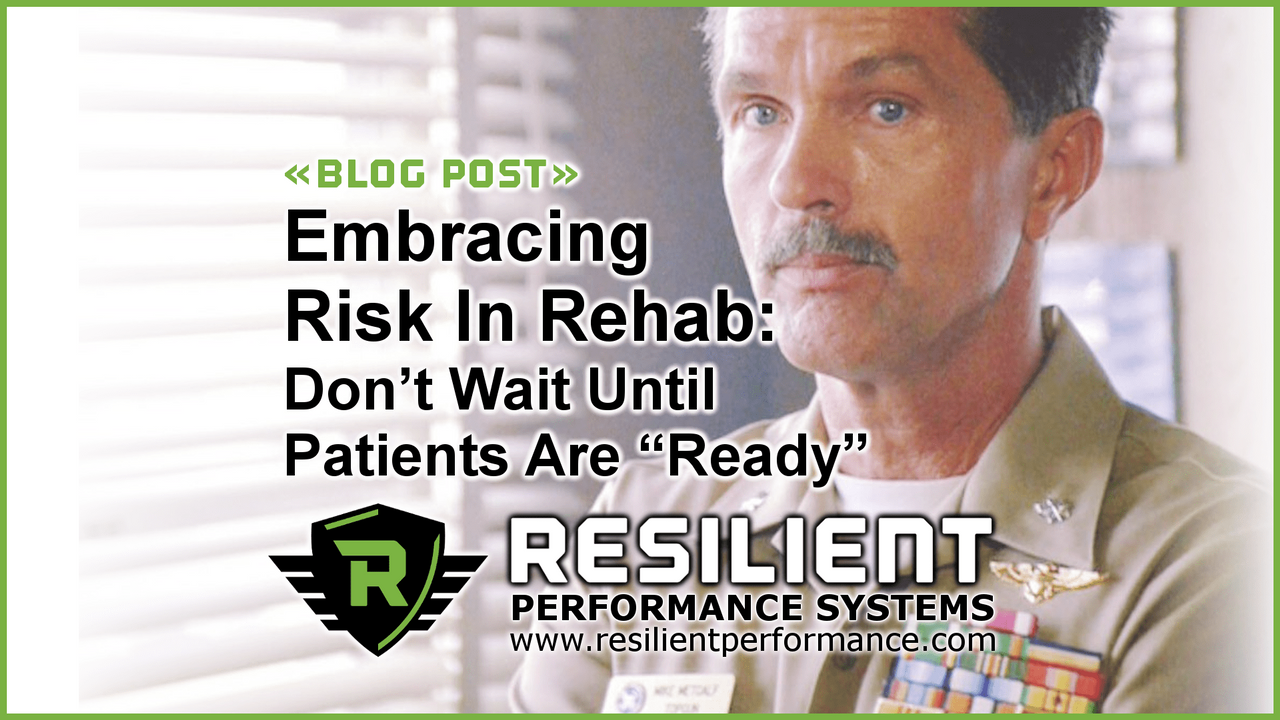 Embracing Risk In Rehab: Don’t Wait Until Patients Are “Ready”

One of the most effective ways to potentially create lifelong patients who remain dependent on the medical system is advising them to completely avoid the things they enjoy doing until they are totally “ready”. The problem with this advice is that seldom do sports medicine professionals ever actually define what constitutes readiness. To be fair, readiness can be a difficult concept to satisfactorily operationalize. Often though, avoidance as a blanket treatment strategy is risk aversion and evasion of professional responsibility masquerading as patient advocacy and safety. The idea here is that nothing can go wrong if people who like running, as an example, are told to no longer run. This line of reasoning can backfire, however, because the longer people put off their preferred activities the more elusive and seemingly unimaginable these tasks become. Since eighties action movies provide profound insights into how to confront timeless problems, we need look no further than to Viper, Commander of the Navy Fighter Weapons School from the movie “Top Gun”. After Goose dies in a training accident, Viper recommends that Maverick, the pilot at the controls during the incident, immediately return to the cockpit upon the completion of the investigative proceedings. Viper knew that the longer Maverick abstained from flying, the harder it would be for Maverick to “get back in the saddle”.

Leadership books and courses are great. Viper is better.

To be clear, I’m not suggesting that athletes sprint at full speed the day after a surgery or a major trauma.  There are instances in which a patient’s preferred activities do pose the risk of further injury. These instances are probably less common than we think.  I’m talking about telling the recreational weightlifter with minor, atraumatic knee pain to just “stop squatting”. I’m talking about an asymptomatic high school sprinter who two months after suffering a grade 2 hamstring strain in a meet still hasn’t done anything resembling running at the suggestion of medical professionals.  I’m talking about the finance executive with occasional back “tightness” upon waking who has refrained from Muay Thai classes for two years despite an unremarkable MRI because somebody told him that his pelvis is asymmetrical and his glutes “don’t fire”. I encountered each of these patient scenarios in a single day and these stories are far too familiar.

There are a variety of reasons why somebody might experience knee pain during something like a barbell back squat.  While the whole isn’t always the sum of the parts, it seems reasonable to look for low hanging movement fruit via orthopedic testing at the relevant individual joints and to screen gross, multi-joint patterns.  Lacking passive knee flexion, for example, might yield some clues as to why the knee hurts while squatting under load. Regardless of a patient’s goal, restoring normal knee flexion is generally desirable and should be achieved as quickly as possible assuming the anatomy will allow it.  Nevertheless, patients need not always be completely “ready” to do the things they enjoy or things that closely resemble said activities. In fact, it’s likely patients weren’t “ready”, via arbitrary constructs like “glute firing” and “pelvic symmetry”, to do those activities when they were asymptomatic.

The point here is that there is a middle ground between the “just load it” camp and the movement optimization camp.  The former undervalues skill/technique and the relative merit of competing movement “solutions” while the latter demands a perfect hip hinge and specific abdominal bracing sequence to perform even the most routine activities.  With regards to loaded squatting, there are ways to modify the task (alter loading pattern-goblet/zercher/safety bar, alter stance width, alter depth, incorporate external constraints- eg squat to a box, modify intensity, modify volume, modify tempo, modify positional emphasis- concentric, eccentric, isometric, etc) to potentially reduce symptoms even without addressing more micro level evaluation findings.  Rather than telling somebody “don’t squat” we can provide alternatives that closely resemble the provocative activity, back squatting with a barbell in this case. The treatment plan can simultaneously address local or more joint-centric influences on the global pattern of barbell back squatting. The part vs. whole training debate is social media clickbait. It’s not a debate for which practicing clinicians need to pick a side.

In the past, I was guilty of emphasizing the things physios value internally (“movement quality”, individual joint function) too much early on at the expense of what patients actually care about.  I undervalued the most important question (“Why are you here?”), the answer to which is generally to confidently perform an activity of daily living or movement that occurs in athletic and/or occupational endeavor without substantial pain. Now, I still care about the former but I make it a point to perform the latter in as contextually similar a matter as possible without symptom exacerbation on the first visit.

The high school runner referenced above performed Mach drills (A walk, A skip, A run) and tempo runs on a non-motorized treadmill on his first visit.  Remember he hadn’t run at all in the previous two months because it was deemed to be “too dangerous”.  If two months post grade 2 strain isn’t safe to do skipping drills and tempo runs, when is it the “right” time?  To the extent possible, most physio treatment sessions should incorporate both part and whole training as skill development and reconditioning, even in the presence of pain, require a blend of both.  The finance executive above performed rotational medicine ball throws and light striking on pads soon after his initial evaluation.  I told him not to wait any longer to start taking Muay Thai classes because the moment when his glutes start optimally “firing” from a perfectly symmetrical pelvis will never come.

There’s no way to definitely validate many of the constructs that are de facto reasons not to do things so we might consider shifting the clinical burden of proof from demonstrating that something is safe to demonstrating that something is dangerous.  I did advise the finance executive to do various exercises at home to address range of motion and strength in his hips because I thought it would help his performance, not in pursuit of some ideal that pathologizes normal human variation and creates dependency on volume based treatment models (e.g. 3x/week for 8 weeks or you won’t get “better”).  To be clear, I’m not suggesting that these people were “cured” because I had them mimic their preferred activities early on in treatment or that I achieve superior clinical outcomes to providers who utilize a different approach. I am trying to make a more concerted effort to consider what patients value instead of just telling them what I think they “need”.

Avoidance is not a sound risk management strategy in sports medicine. Risk aversion is not risk mitigation. Outside of post-operative situations and legitimate orthopedic trauma, complete avoidance of the desired activity is seldom helpful.  Avoidance without an immediately actionable progression scheme is more likely to perpetuate fear and doubt. Risk mitigation demands that risk be applied responsibly and avoid large downsides or fat tails.  Without some risk, however, there is no adaptation or confidence.  Too little risk can be just as dangerous as too much risk, unless patients remain in their cocoons forever.  Without risk, the patient relies on nothing but hope and time. Something physical therapists and sports medicine professionals often forget is that most of our patients functioned just fine before they met us.  A minor injury, sensation of pain, or temporary setback need not justify months of physical therapy, orthopedic consults, home exercise programs, or bodywork. More is not better. Better is better. A health care system that minimizes competition among providers and stifles market forces incentivizes more treatment, not better treatment.

There’s a huge difference between helping somebody to help him/herself and trying to be the reason somebody gets better.  Well intentioned medical providers often try too hard to be the latter without appreciating that more information, intervention, etc. can confound clinical outcomes.  For this reason, it can be very difficult for patients to dip their feet in the medical pool without getting sucked into the deep end. Additionally, there are systemic political and economic incentives that promote interventionism and the medicalization of normal fluctuations in health and wellness.  The goal of rehabilitation is to help people return to the things that are meaningful to them, not to maximize EMG activity in a special muscle (a list that continues to grow with more research) or receive a perfect score on a standardized movement assessment. The latter should serve the former, not the other way around.  In the information age, strategic insight is neglected in pursuit of tactical endeavors from which it is easier to generate data points and quantifiable metrics. Maverick enjoys being awesome at aerial combat and if he’d waited for the perfect time to start flying again he might have missed out on what proved to be his finest moment.  To be awesome, you have to be a little dangerous.