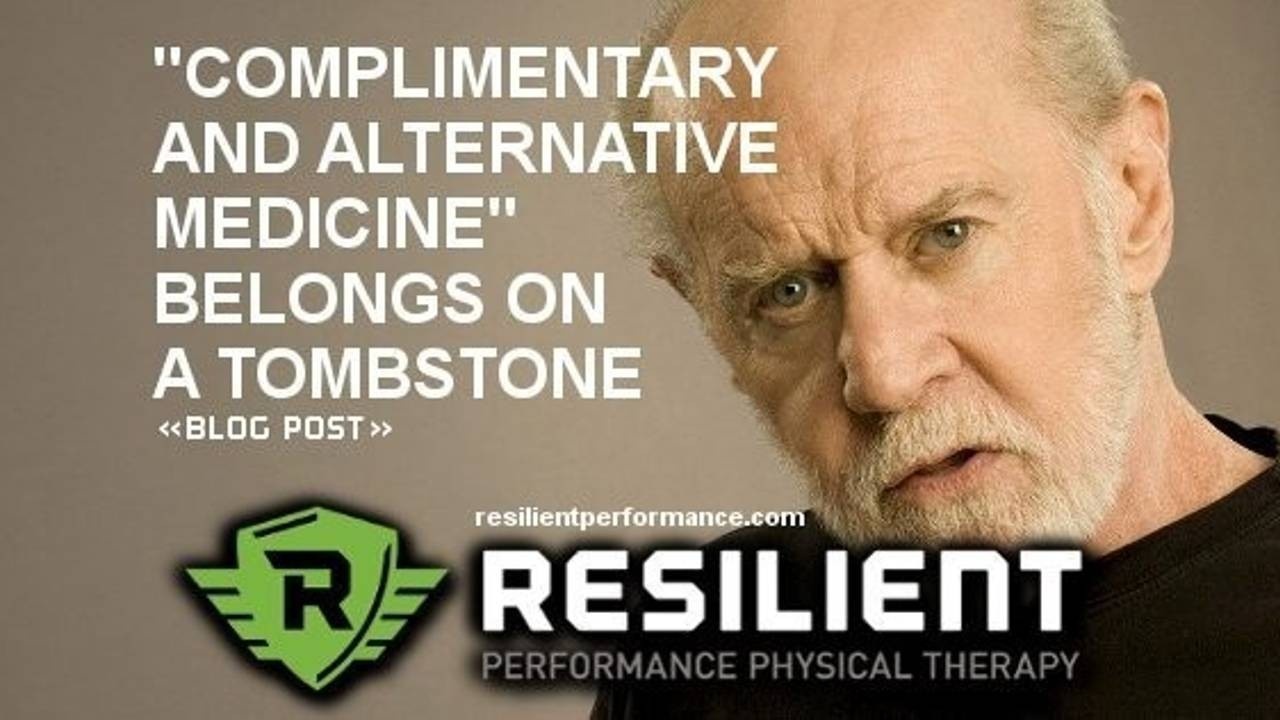 “Complimentary and Alternative Medicine” Belongs On A Tombstone

“Complementary and alternative medicines (CAM) are treatments for which either evidence is lacking, or for which evidence suggests no effect over a placebo treatment. When a non-evidence-based treatment is used alongside conventional medicine, it is considered ‘complementary’. When a non- evidence-based treatment is used instead of conventional medicine, it is considered ‘alternative’. Many forms of CAM have origins and/or a history of use beyond evidence-based medicine. Further, many CAM treatments are based on principles and/or evidence that are not recognized by the majority of independent scientists. When a person uses CAM and experiences an improvement in symptoms, this may be due to the placebo effect.”

The above passage comes from a British Journal of Sports Medicine article that is being disseminated in various orthopedic and rehabilitation social media platforms. The authors essentially contend that recent breakthroughs in the ability to measure and quantify the placebo effect do not justify the use of interventions characterized by non-specific mechanisms of action in patient care. Perhaps I’ve watched too many George Carlin bits but I’m skeptical about people who share these types of articles. Much like people who make obvious political points to demonstrate that they’re not diabolical spirits, clinicians and researchers who rhetorically champion evidence based medicine (EBM) and criticize CAM are mainly virtue signaling. They’re saying, “Look, I’m one of the good physios/physicians/trainers because the evidence supports my clinical approach- unlike the CAM quacks.” Conversely, cheerleaders for CAM are telling us, “I’m not one of those clinical dinosaurs practicing traditional medicine.” The above passage is replete with tautological reasoning and faulty assumptions. It is so abstract and nonspecific that it is virtually irrefutable if one accepts the underlying premises. First, it suggests that there is a definitive standard as to what constitutes sufficient evidence for a particular treatment. I’m not sure this standard exists. For example, the evidentiary standard for a surgical procedure should probably be higher than for something like cupping (referenced in the article) because risk and cost are greater in the former instance.

Additionally, the authors’ definition of “complementary” and “alternative” rely upon a “conventional” construct that is associated with strong evidence by default. We can’t assume that longstanding acceptance or utilization of a “conventional” treatment necessarily ensures its efficacy. Moreover, it is unclear who gets to decide what’s considered “conventional” medicine compared to CAM. There’s no way to answer that question in a way that isn’t politically and financially tainted which is why there should just be “medicine” and not this arbitrary distinction between conventional, complementary, and alternative.

Furthermore, the practical distinction between evidenced based and non-evidenced based medicine is also minimal because most providers believe, rightly or wrongly, that the evidence is on their side. Rhetorical, lazy language doesn’t advance the practice of medicine. CAM is a meaningless term. There is just medicine, presumably that which is empirically and theoretically robust. Attaching CAM, as defined in the article, and non-evidenced based treatments to “medicine” preserves their legitimacy. Why dignify ineffective treatments with the word “medicine” at the end. Pragmatically determining the arbiter of “medicine” is more of a political than a philosophical question. One could make a case, again based on the above article, that surgical procedures that don't achieve superior outcomes to sham procedures in controlled trials are CAM. Therefore, surgeons who perform these procedures would be practicing CAM. A similar line of reasoning can be applied to something like platelet rich plasma (PRP) based on what is currently known about this treatment. ​I doubt surgeons and PRP providers whose interventions lack overwhelming “evidence” regard themselves as complimentary and alternative medical professionals. Championing the conventional/CAM dichotomy is short sighted because it can backfire as knowledge and information evolve. While there are different degrees of good and bad, pontificating about “evidence” can be sanctimonious and puritanical. This is not to say that medical providers should be discouraged from challenging one another just that the certainty with which some people cling to their “evidence” is not compatible with the humility that is typically warranted when analyzing complex phenomena. Whenever a non-binary choice is to be made, as is often the case in medicine, the answer is contingent upon “reasonable” standards (think legal proceedings). “Reasonable” is a highly fluid, subjective, and contextual term. This nuance need not perpetuate constructs like EBM and CAM that mainly confound an already ambiguous situation. The upper tiers of the medical hierarchy often refer to CAM to discredit threats to their market share from professions that claim to treat the same patient population at lesser cost. The lower tiers of the medical hierarchy use CAM to discredit more mainstream interventions (e.g. traditional medicine is so antiquated and reductionist- we need an alternative to it- and we’re cheaper too). Either way, the use of CAM is generally self-serving and does little to advance the practice of medicine. Assuming everybody just tried to practice "medicine" most professions would be espousing the same ideas, albeit practicing differently based on legal and educational constraints. Most medical providers support the spirit behind EBM (don’t just do things “because that’s the way we’ve always done it”) even if the concept itself is rhetorical. Like political conversations, however, medical discussions are typically superficial. Without details, articles like the one referenced above are merely academic. What constitutes “good” medicine depends on the condition/disease process, patient population, and contextual factors that many randomized controlled trials regard as noise. Throughout history, human beings have solved their most pressing problems (food procurement, safety from predators, protection from environmental threats) through tinkering and collaborative effort. In order to raise the standard of medical care, providers who believe the “evidence” is on their side should share case studies to demonstrate their thought process in specific situations. Clinical transparency is preferable to virtue signaling about evidence. “Reasonable” people mainly agree in the abstract. Speaking in the abstract (e.g. “I support EBM”) is safe because it’s the details and execution that are incriminating. Advancing the practice of medicine is not simple. Putting CAM on a tombstone is a start.

​George Carlin likely not a fan of CAM and EBM Warning: Obscene Language