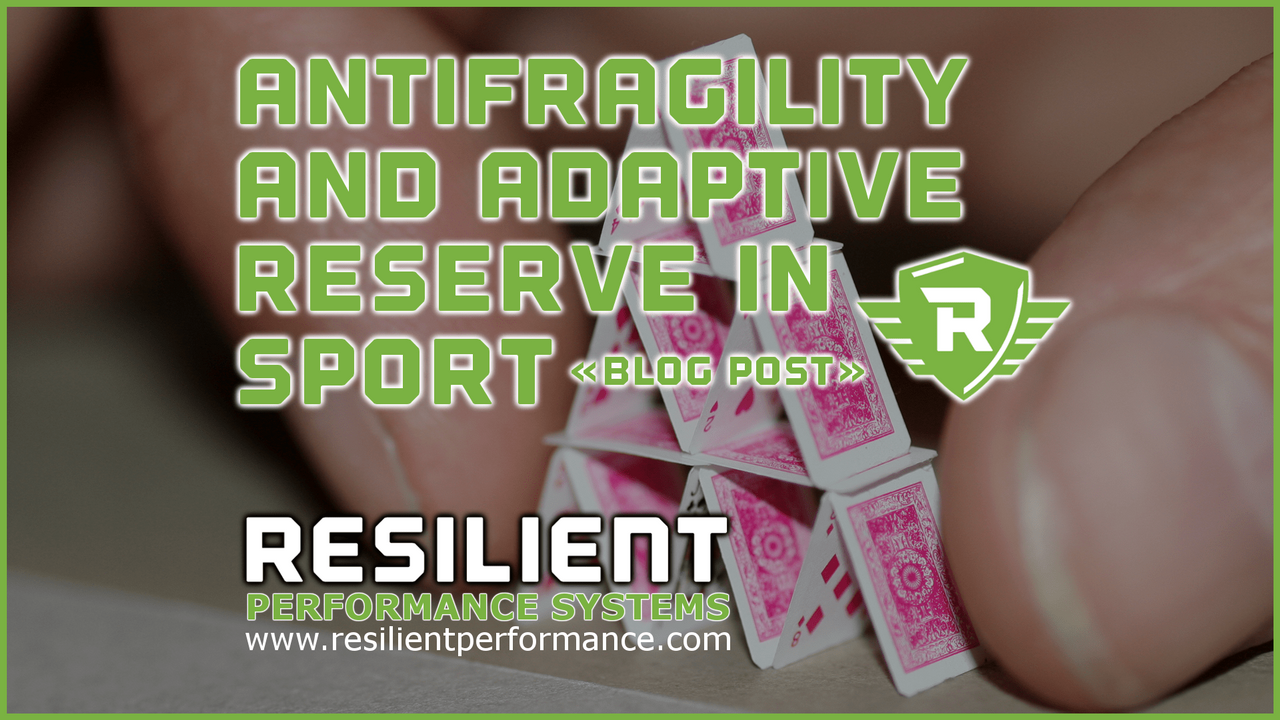 Antifragility and Adaptive Reserve In Sport

What is really the point of physical preparation and strength and conditioning? Human performance professionals sometimes fixate on concepts like transfer and specificity but attempting to mimic sport outside of a practice or competitive setting squanders an opportunity to introduce novel stressors that improve readiness through seemingly indirect means. Nothing transfers like playing the actual sport so if it’s mainly transfer or specificity we’re after, it’s hard to make a case for doing things like squats and running at maximal velocity in a straight line. Moreover, transfer is very difficult to quantity as so many variables influence sporting outcomes. Nevertheless, linear speed development and strength training can and probably do positively influence sporting outcomes but not necessarily because they mimic the game. Challenging physiology off the court or field is worthwhile because it helps develop Antifragile systems.

The concept of Antifragility is described in great detail by Nassim Taleb in his book “Antifragile”. Antifragile systems are those that ultimately benefit from disturbance and volatility. Ideally, any disturbance to a system would elicit adaptations that render it more resistant to similar disturbances at a future time. Applying stress in controlled doses to elicit favorable adaptations is the essence of training. Training should ultimately develop the qualities necessary for performance in some abundance so that the performance itself does not overly deplete the athlete’s stress reserves. Adequate preparation/training renders the game less costly so that one emerges less relatively fragile following a performance. There are no free rides in biology, however. While some degree of maximal strength is required to play on the offensive or defensive line in American football, as an example, developing maximal strength far beyond a certain threshold will divert resources away from other important qualities necessitated by the game. Attempting to develop a quality to its physiological extreme potentially compromises health and performance as it promotes rigidity or a pathological lack of variability. Variability provides options and multiple solutions to a problem. Some degree of variability allows one to be more adaptable. There is a downside to specialization. The line between elite performance and health is very fine one, however. Possessing the absolute minimum level of maximal strength necessary to play offensive or defensive line is not desirable either. Similarly, military assault forces must patrol extensive distances through adverse terrain at a particular rate of travel to adhere to mission planning timelines. The critical part of the mission, the “actions on the objective”, typically occurs after the most physically demanding aspect of the operation, the infiltration on foot. The more technically and tactically demanding actions on the objective (e.g. rescuing a hostage, apprehending an adversarial force) are likely to be compromised by fatigue if the infiltration itself represents a maximal physiological effort. The point then is to develop the requisite level of a particular quality and little bit more but not so much that it detracts from other qualities or jeopardizes health. Therefore, some adaptive reserve is necessary to promote antifragility and minimize the cost of performance but the physiological endpoints must be reasonable. Without this adaptive reserve, however, the athlete is like a physiological house of cards- the smallest disturbances compromise performance. You don’t want to have to operate at 100% just to do your job or play your sport. Sandcastles do not like volatility.

Castles Made of Sand...

Determining how much of a particular quality is “enough” is the most relevant, but difficult, question performance staffs must confront.  Again, these types of thresholds are very difficult to quantify and study in a controlled setting.  Conceptually at least, the idea that athletes should be physiologically and biomechanically somewhat over-prepared for the game seems reasonable.  Every physiological quality is its own bucket or bank account, not just those pertaining to strength, speed, or endurance. It is not uncommon now to hear even physical therapists say things like “runners don’t need to do any ancillary mobility work”.  Taleb would have harsh words for these people.  If a marathoner, as an example, can barely passively demonstrate the degree of hip extension competent runners generally achieve while running, he/she is likely leaving potential on the table.  And yes, I understand that passive and dynamic range of motion are not the same but the point is that achieving one hundred percent of one’s available hip extension on every stride of 26.2 mile race doesn’t seem like an efficient strategy for an endurance athlete.  Neither does striving to attain the mobility of a Cirque Du Soleil performer seem appropriate for an endurance athlete.  Regardless, it doesn’t seem prudent for marathon runners to just run or for football players to just play football.  Lacking any kind of adaptive reserve promotes fragility and overspecialization while compromising health and performance.  General training (e.g. strength and conditioning) makes the buckets bigger so that skill can prevail in the game.